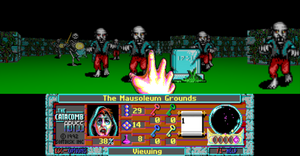 The Mausoleum Grounds from the Catacomb Abyss in CatacombGL

CatacombGL is a Windows source port of the Catacomb Adventure Series. The main goal of this source port is to improve the visual presentation of the games. It features hardware accelerated 3D rendering via OpenGL, supporting widescreen resolutions, a customizable field of view and an uncapped frame rate.