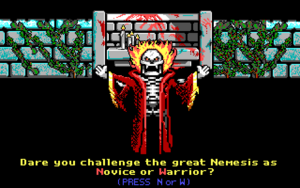 Nemesis is the main antagonist and final boss of Catacomb 3D and the Catacomb Adventure Series. An arch lich and necromancer, he is known for his skeletal appearance and propensity for evil.

Nemesis has kidnapped Petton Everhail's friend Grelminar and entrapped him in an amber sarcophagus. Everhail must ascend Nemesis's keep and rescue his friend.

Nemesis in Catacomb 3D is the toughest enemy in the game; he has 90 Hit Points and fights somewhat similarly to a Mage in that he shoots Magick Missiles at the player. Unlike the Mages, however, Nemesis doesn't even try to avoid enemy fire and focuses entirely on offense. When encountered, he's backed up by three Demons, who will rush the player while Nemesis hangs back and snipes from afar. Because his missiles travel harmlessly through his minions, this is actually the most dangerous encounter in the game since it's easy for the player to get overrun.

Once his escort's dealt with, Nemesis is laughably easy to defeat; rapidly fire Magick Missiles at him and he won't even get further shots off.

Following his apparent demise, Nemesis' minions erected a mausoleum in his honour, and he returns as the final boss of Catacomb Abyss.

He's gone from being the complete joke he was in Catacomb 3D to actually threatening now, hurling fast-moving skull projectiles that are capable of killing the player in 4 hits on Warrior difficulty. Even worse, he reacts to damage by throwing additional skull projectiles, allowing him to easily bring down the most prepared player in a flurry of devastating damage no other monster can match. With 100 Hit Points, he is even tougher than previously, and he's holding the Red Key that the player needs to beat the game.

It is highly recommended to fire off Zappers to wear down his enormous health pool, and use Cure Potions to heal off the enormous amount of damage he tends to do to the player in the process. If he manages to get close, repeatedly firing off Xterminators can bring him down extremely quickly, and this is arguably the easiest way to defeat the wily lich.

When he is defeated, he collapses to the floor and his head explodes.

Nemesis is one of the rare enemies that does not require a Jewel to find on the Crystal Sphere. He appears as a white dot.

One of his many clones in Armageddon.

Nemesis returns with a new and terrifying trick: He's begun cloning himself!

You'll first run into these despicable dopplegangers in The Chamber of the Evil Eye, and they are nearly as powerful as his incarnation in Catacomb Abyss. While these clones do somewhat less damage than the original, their damage output is still extremely high, they share the original's tendency to react to being shot by shooting additional projectiles, and they almost invariably appear alongside other enemies. They have 60 hit points each, making them quite difficult to bring down, and as one of the most threatening enemies in Armageddon, using Zappers and Xterminators is recommended to reduce the number of Cure Potions you'll need to burn off fighting them otherwise.

The safest way to take out a Clone is with a Crystal Hour Glass, but their sheer toughness means each Hour Glass can at best kill one.

In the encounter with the clones in The Fortress of Nemesis, they get stronger - starting off slightly weaker than the ones from the Chamber of the Evil Eye at 40 hit points, followed by two with 60 hit points each, then three with 80 hit points each. Finally, after the contingent of Nemesis clones, the player faces the Lich himself, with a contingent of Mages for backup.

While he looks the same as the clones, he is, if anything, even more powerful than his Abyss counterpart, able to kill the player in 3 hits, with each shot from him doing almost half of the player's life total - and fighting essentially in the same way his clones did, making him unquestionably the strongest monster in the game up until this point. He also boasts a unprecedented 150 hit points, making him easily the toughest enemy in the game so far. However, the player has one saving grace: The arena Nemesis fights the player in has no less than three Crystal Hour Glasses, giving more than enough of a chance to wear down his bodyguard and his massive hit point total.

Accessing time portals, Nemesis is on a quest to conquer history itself. Can he be stopped once and for all?