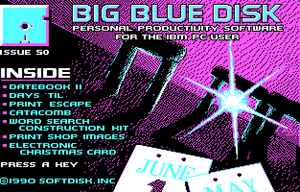 Big Blue Disk was a monthly disk magazine that was published by Softdisk for IBM PC and compatibles that began circulation in 1986. It required 256k of memory. Softdisk was sued by IBM for trademark infringement over the use of the name "Big Blue" in 1989. The original Catacomb for MS DOS was released on volume #50 for December 1990. It was the only game on the disk, the closest alternative being an animated Christmas card. Later entries (#52 and #54) featured DOS ports of the first two volumes of John Carmack's Dark Designs trilogy.

Retrieved from "https://catacomb.miraheze.org/w/index.php?title=Big_Blue_Disk&oldid=2812"
Category:
Cookies help us deliver our services. By using our services, you agree to our use of cookies.