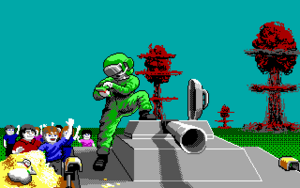 Brick Sledge is the protagonist of Hovertank 3D. A mercenary and skilled hovertank operator, he is hired by an organization called UFA to rescue hostages from mutants, monsters, rival pilots and imminent nuclear attack. His relationship with his handler in the organization varies depending on mission success.

His final appearance at the end of the game in a green helmet and combat suit is reminiscent of the look of the protagonist of id Software's Doom.

Retrieved from "https://catacomb.miraheze.org/w/index.php?title=Brick_Sledge&oldid=2631"
Category:
Cookies help us deliver our services. By using our services, you agree to our use of cookies.