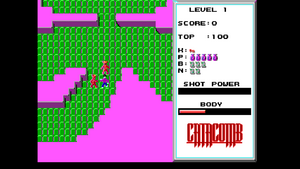 Screenshot of the first level of The Catacomb in CatacombSDL

"CatacombSDL is a source port for The Catacomb (also known as Catacomb II). This port compiles for Windows, OS X, and Linux for 32 and 64-bit X86. The only dependency is SDL 2.0 and CMake. Supported compilers are GCC, Clang, and MSVC. It is released under the GNU GPLv2. Please see COPYING for license details. The source port is a drop in replacement for the DOS binary, and maintains full compatibility with the DOS game files (demos, saves, and configuration). This brings about a few limitations most obvious in control configuration. For example, keyboard binds must correspond to a DOS scan code and joystick support is limited to 2-axis and 2-buttons. Also note on case sensitive file systems, this port currently requires that the game data files (*.CA2) be in all upper case."
--Official documentation

CatacombSDL is a modern source port for The Catacomb using the Simple DirectMedia Layer framework; eventual support for the original Catacomb has been listed as a potential upgrade in the future, as well as porting from C to C++, reviving the game's map editor, and potentially adding in more advanced multimedia (perhaps something similar to Catacombs GS). The port was created by Braden Obrzut (aka Blzut3) of the ECWolf project, with such an effort part of the inducement he gave to Flat Rock Software towards releasing the original source code for the Catacomb games.

Retrieved from "https://catacomb.miraheze.org/w/index.php?title=CatacombSDL&oldid=2478"
Categories:
Cookies help us deliver our services. By using our services, you agree to our use of cookies.