This article is for the original top down game for the Apple II; for other uses see Catacomb 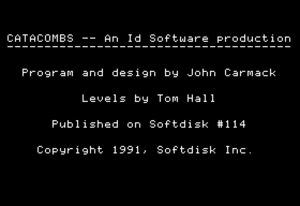 "Catacombs is an arcade-style game in which you explore the catacombs inside Mount Kel-Keriad and fight the monsters within. Destroy the monsters and collect gold!"
--Description

Catacombs is a 2-D top-down third-person shooter created by John Carmack for the Apple II. It premièred with Softdisk issue #114 from March 1991 following on from the December 1990 release of the DOS version entitled simply as Catacomb.

The order of development is still a matter of speculation, given that Carmack's previous games (most notably Dark Designs) were created for the Apple II first with a subsequent PC port (as was John Romero's Dangerous Dave). Its possible that the released version is a revamp of an original basis that turned into the DOS version. This has lead to much confusion as to the release order of the games, with many sources (such as IGDB) citing an Apple II release as early as 1989 (the directory for the DOS version supplied with the Catacombs Pack is also curiously listed as "Catacomb1989"). The Apogee FAQ has the points of release right, but the order wrong, but still gives credence to the PC version being the port. Most tellingly, John Romero has written that Catacomb was first written for the Apple II and was Carmack's first game for Softdisk, and also makes note of a double-res (16-color mode) version which might be the Catacombs that was publicly released.

"You are Petton Everhail, the most powerful magician in the world, journeying to Mount Kel-Keriad. The evil Shandrani forces have driven the mountain's peaceful inhabitants away. You must vanquish the monstrous invaders!"
--Storyline

The story is different than the PC version, featuring Petton Everhail travelling to Mount Kel-Keriad to fight Shadrani invaders to retrieve treasures (rather than to the Kieralon Empire). 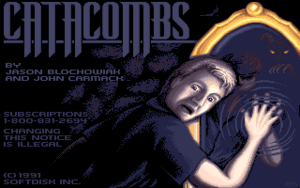 Catacombs GS is a port of to the Apple IIGS by Jason Blochowiak, who was later with id Software for a time, released later in 1991 with Softdisk G-S #20. It is notable as the only version in the series to feature digitized sounds, as well as more detailed graphics than even the DOS version. Despite these improvements, it is the most obscure entry in the series, and otherwise is identical in gameplay and level layout to the standard Apple II version.

Retrieved from "https://catacomb.miraheze.org/w/index.php?title=Catacombs&oldid=2582"
Categories:
Cookies help us deliver our services. By using our services, you agree to our use of cookies.