Good Map To Use 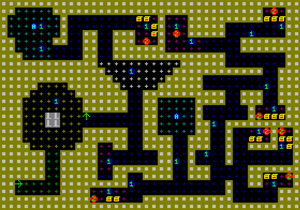 Map layout of Good Map To Use, as visualised in the Wolf3D Data Compiler

Good Map To Use is a test level from the Catacomb Abyss, residing in slot 22. It has no official name, but the MAPSABS.H file in the source code refers to it as 'GOOD_MAP_TO_USE_MAP'. This level is essentially an exact copy of the Halls of Blood level in Catacomb 3D. Nevertheless, the in-game appearance is different, due to the differences in the source code between Catacomb 3D and Catacomb Abyss. One of the consequences is that the wall textures look different. Also, the red demons from Halls of Blood are replaced with blue demons in Good Map To Use. Finally, the exit gates are replaced with red demons. This level is not accessible via the original DOS game executable. However, it is playable in the CatacombGL source port, via the level warp cheat. The layout of the level can also be viewed in the Wolf3D Data Compiler. 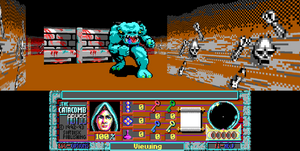 The start area of the level, as shown in the CatacombGL source port

Good Map To Use consists of two maze-like area's, connected by a pair of portals. There is no exit.

There is no LEVEL23TEXT entry in the EGAGRAPH.ABS file, hence there are no messages defined for this level. Interestingly, the floor tiles of every room are marked as if there are messages available.

Retrieved from "https://catacomb.miraheze.org/w/index.php?title=Good_Map_To_Use&oldid=1009"
Categories:
Cookies help us deliver our services. By using our services, you agree to our use of cookies.