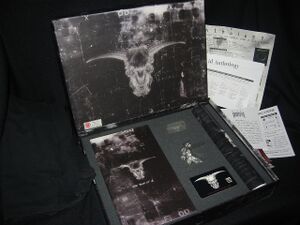 The id Anthology was a collection released on November 30, 1996 by id Software and GT Interactive of all the games they had so far made. As well as The Catacomb, Hovertank 3D and Catacomb 3D, it includes all of the Doom games prior to Doom 3, but also the first Quake, Wolfenstein 3D and every game in the Commander Keen series. However, it does not contain Heretic and Hexen, which id co-developed with Raven Software, nor does it contain later Softdisk only entries like the Catacomb Adventure Series or subsequent Dangerous Dave sequels.

In total there are 19 games contained on four CDs. The id Anthology is often found for sale on eBay, where it can reach hundreds to thousands of dollars in price. The value increases if the collection is complete; often, some or all of the collectible items are missing. Only 10,000 copies of the id Anthology were sold; despite this rarity, it is probably still the easiest way to get a copy of the id developed Softdisk games on disc.

Retrieved from "https://catacomb.miraheze.org/w/index.php?title=Id_Anthology&oldid=1711"
Category:
Cookies help us deliver our services. By using our services, you agree to our use of cookies.