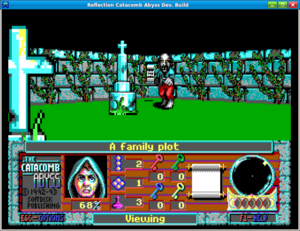 ReflectionHLE (previously Reflection Keen, also known as Reflection Catacomb) is a source port for Keen Dreams, as well as Catacomb 3D, the Catacomb Adventure Series, Wolfenstein 3D, Spear of Destiny and Super 3D Noah's Ark created by NY00123. Although at first brush this seems odd, given the former is a 2D side scroller and the latter are 2.5D first person shooters, the games share very similar code bases outside of the rendering. This includes sharing the same tile map format called GameMaps for the TED editor, as well as the Paddle War mini-game based on Pong accessible from the main menu in both Keen Dreams and Catacomb 3D. The port can officially be built for Microsoft Windows, Linux and Android, but has also been tried on macOS and Amiga OS. The source port itself is fairly conservative, explicitly inspired by Chocolate Doom, other than adding more graphic options. One stand out feature is that it emulates the screen border flashes seen in the original game on old CRT monitors, most commonly when taking damage but also to indicate passable walls in Catacomb Apocalypse, so that they work on modern LCD screens. It also gives users the ability to not worry about regulating CPU cycle rate, as setting them too high in DOSBox can cause screen flickering.

Retrieved from "https://catacomb.miraheze.org/w/index.php?title=ReflectionHLE&oldid=2837"
Categories:
Cookies help us deliver our services. By using our services, you agree to our use of cookies.