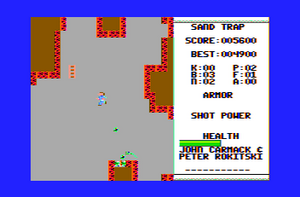 Sand Trap is the fourth and final entry in the line of Catacomb games for the Apple II and Apple IIGS. It was released in 1994 by Softdisk, developed by Peter Rokitski, and technically is the newest Catacomb game by release (Catacomb Apocalypse for PC was released the previous year). An Apple IIGS version launched with Softdisk G-S #72. Having returned from the ethereal plane from Ether Quest, Petton Everhail finds himself trapped in a pyramid by a powerful immortal and must find his way out. It features a time freeze ability similar to the Crystal Hour Glass from the Catacomb Adventure Series, alongside an armour that is obtained every 10,000 points.

Retrieved from "https://catacomb.miraheze.org/w/index.php?title=Sand_Trap&oldid=2772"
Categories:
Cookies help us deliver our services. By using our services, you agree to our use of cookies.