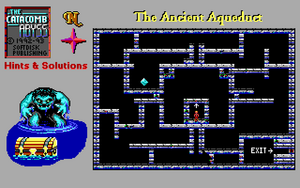 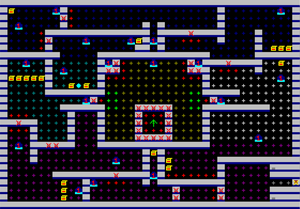 Map layout of The Ancient Aqueduct, as visualized in the Wolf3D Data Compiler

The Ancient Aqueduct is the eigth level (slot eight) of Catacomb Abyss (1992). In one of the game's more impressive designs, it is set in the watery channels of an aqueduct, including Water Trolls that can submerge themselves. It also features the Blue Gem.

"This aqueduct level is really something unique due to it's theme with the water effect. Together with the water trolls that can emerge from the water this creates a very nice atmosphere. Life get's easier, when the fourth gem (blue) is found."
--kraileth

This level was re-created as part of the Catacomb: ABYSS total conversion for the ZDoom engine.

Retrieved from "https://catacomb.miraheze.org/w/index.php?title=The_Ancient_Aqueduct&oldid=2669"
Categories:
Cookies help us deliver our services. By using our services, you agree to our use of cookies.