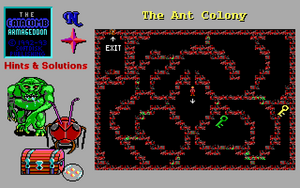 The Ant Colony is the eighth level (slot seven) of Catacomb Armageddon (1992). It is set inside the winding subterranean depths of an ant colony.

"The action in this map takes place inside a colony of gigant red fire ants. Just like one would expect, there are many tunnels, egg chambers, etc. There's also another new enemy there: The "Wretched Pox", some green mutated-looking green thing that has a rather strange death animation."
--kraileth