The Battleground of the Titans 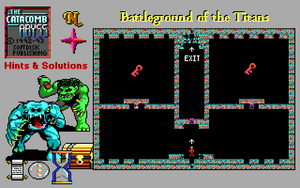 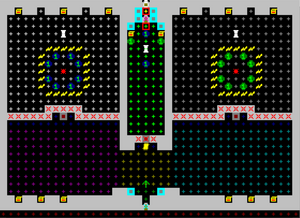 Map layout of The Battleground of the Titans, as visualized in the Wolf3D Data Compiler

The Battleground of the Titans is the twelfth level (slot twelve) of Catacomb Abyss (1992). It is set in a bricked series of arenas adorned with Nemesis' portraits.

From the opening antechamber, the area is divided into three sections, the Arenas of the Trolls and Demons on the far sides, and a central corridor with two locked doors. Defeating the two Titan races provides the red keys for the way forward.

"Trolls and demons as the toughest enemies of the game are supposedly the 'titans' from the title. This level consists of two big fights against a horde of trolls and one of demons."
--kraileth