The Chamber of the Evil Eye 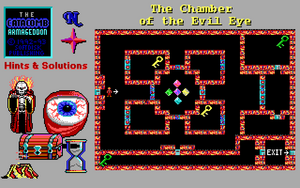 The Chamber of the Evil Eye (also known as Bloody Chamber of Evil Eyes) is the eleventh level (slot ten) of Catacomb Armageddon (1992). It is set in a sulphurous hellscape.

"This map has the nice theme of some hell-hole made from blood and sulfur. The main enemies here are again the beholders - but there are three Nemesis clones there as well! They are extremely easy using the hourglasses - but I didn't want to wait all the time until the timer runs out more than once to show off this feature."
--kraileth