The Fire Node of Time 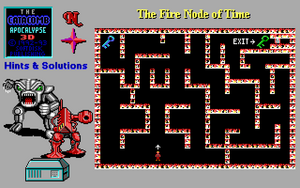 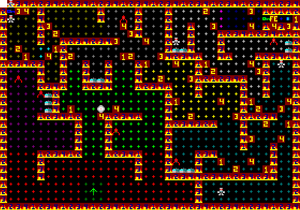 Map layout of The Fire Node of Time, as visualized in the Wolf3D Data Compiler

The Fire Node of Time is the sixth level (slot five) of Catacomb Apocalypse (1993). In this level all walls are covered in flames, similar to The Flaming Inferno in Catacomb Armageddon. The green key must be collected and taken back through the time gate to the hub level The Axis of the Time Lords. There the green key serves to open the Third Door. The Fire Node of Time introduces the Running Eye: a cyborg eye which aids the player in navigating through the level. The Running Eye repeatedly follows a fixed path through the level. Located along its path are both the green and blue key.

"This is a fire level and thus has only fire textures for the walls. This makes it rather hard to keep ones orientation. There are two types of mech enemies. A small red one that can shoot and a big one that can't."
--kraileth