The Hall of the Wretched Pox 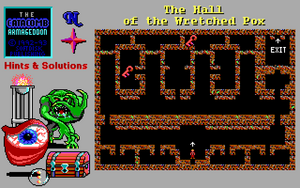 The Hall of the Wretched Pox is the ninth level (slot eight) of Catacomb Armageddon (1992). It is set within a brown brick maze lined with flambeaus and infested with slimy green monsters, the titular Wretched Pox.

"This level has an overground hall theme that is quite nice with the brick walls and the flambeaus. It is very nice to say the least. The designers made excellent use of the palette here. This is one of the examples that EGA graphic CAN look great whereas they usually look unsatisfying. While in most themes it shows that they could have looked much better with more colors, it's all fine and well here with only 16 colors available. There are evil eyes as enemies besides the pox-things. These beholders have the ability to shoot and while their shots are weak and flying slowly, they can be a threat if you are unwary!"
--kraileth

Retrieved from "https://catacomb.miraheze.org/w/index.php?title=The_Hall_of_the_Wretched_Pox&oldid=1993"
Categories:
Cookies help us deliver our services. By using our services, you agree to our use of cookies.