The Lair of the Succubus 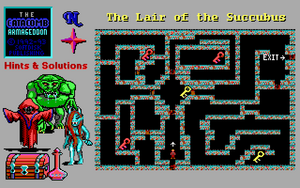 The Lair of the Succubus is the tenth level (slot nine) of Catacomb Armageddon (1992). It is set in a cracked barren realm, home to the dreadful but seductive succubus.

"This map has a rather boring theme (especially when compared to the last one) that resembles some kind of demonic plane. There are pox and mages here - and another very creative enemy: The succubi (A succubus is a demon that disguises itself as a beautiful woman and tries to seduce and lure men into their demise). Map design-wise the level is quite ok, though."
--kraileth