The Lost City of the Damned 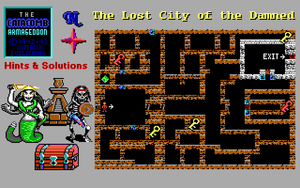 The Lost City of the Damned is the fourth level (slot three) of Catacomb Armageddon (1992). It is set within ruins of a lost city filled with Medusa-like viper women.

"This map has a garden-like theme and the player fights against skeletons. Also medusa statues can be met here that are harmless in their stone form but can come to life any time."
--kraileth