The Passage to the Surface (Abyss) 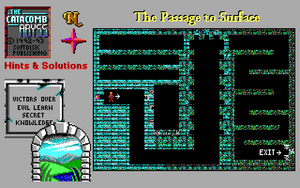 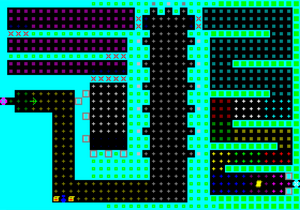 Map layout of The Passage to the Surface, as visualized in the Wolf3D Data Compiler

This article is for the final level of Catacomb Abyss, for the other levels of this name see The Passage to the Surface

The Passage to the Surface is the sixteenth and final proper level (slot sixteen) of Catacomb Abyss (1992). It features no enemies and contains the way back to the surface after first passing a Hall of Fallen Foes.

Walk down the passageway and through the Hall of Fallen Foes, then blast the wall on the right side. This opens the way that leads to the archway to the surface.

"Some kind of 'credits level' as Nemesis is history already and there are no more enemies here."
--kraileth

This level was re-created as part of the Catacomb: ABYSS total conversion for the ZDoom engine.

Retrieved from "https://catacomb.miraheze.org/w/index.php?title=The_Passage_to_the_Surface_(Abyss)&oldid=2680"
Categories:
Cookies help us deliver our services. By using our services, you agree to our use of cookies.