The Ramparts of Nemesis 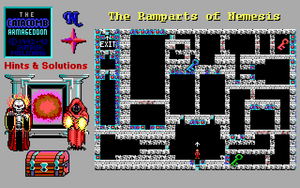 The Ramparts of Nemesis is the fifteenth level (slot fourteenth) of Catacomb Armageddon (1992). It is set in the outer defences of Nemesis' fortress.

"This is the last level before the final boss. The theme here is that of a fortress and enemies are skeletons and mages. There are also three Nemesis clones to be conquered."
--kraileth