The Sanctuary of the Dead 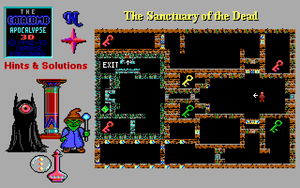 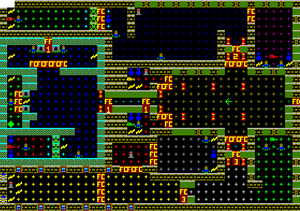 Map layout of The Sanctuary of the Dead, as visualized in the Wolf3D Data Compiler

The Sanctuary of the Dead is the first level (slot zero) of Catacomb Apocalypse (1993). It is set in a brown brick and hedge garden adorned with depictions of Nemesis' wearing Egyptian Pharaoh-style headdress.

"The first level of Apocalypse has an outdoor garden-like theme with a few strange elements. The enemies here are gremlins and black spectres. And this shows what this is all about: Two shooting enemies types in the first level - the last part of the trilogy is FAR harder than the previous two were. You'll actually need your healing potions this time - at least if you're playing the warrior skill. There's also another thing new to this part of the trilogy: Fake walls (they are textured but non-blocking)."
--kraileth