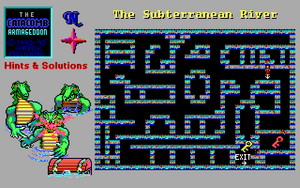 The Subterranean River is the thirteenth level (slot twelve) of Catacomb Armageddon (1992). It is set in an underground aquifer.

"This is the second water level in the series (the first one being part of Catacomb Abyss). It's nice, too, but a little harder due to the water dragons which are dangerous enemies. There are also lots of hidden rooms with treasure chests here."
--kraileth