The Temple of Vipers 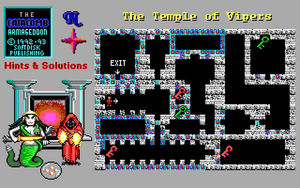 The Temple of Vipers is the fifth level (slot four) of Catacomb Armageddon (1992). Following from their appearance in the previous level, this one is set within a temple complex devoted to the gorgon vipers.

"Just like the name suggests, this level is a viper / medusa temple. The player meets medusas and mages while he explores unholy altar rooms and ventures through portals connecting those."
--kraileth

Retrieved from "https://catacomb.miraheze.org/w/index.php?title=The_Temple_of_Vipers&oldid=1989"
Categories:
Cookies help us deliver our services. By using our services, you agree to our use of cookies.