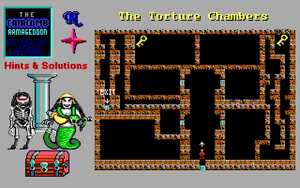 The Torture Chambers is the sixth level (slot five) of Catacomb Armageddon (1992). It is set in a series of corridors containing chained or hung skeletons.

"In this map the action takes place in a sparsely furnished torture complex. There are two types of skelettons: Hanging victims and others are shackled to walls. Both types can come alive as ordinary skelettons. In addition to those there are again medusa statues there. And while it is usually not a good idea to place neccessary items (like keys) in hidden areas, searching for these is an important part of Catacomb's gameplay. And since the hidden areas are not too hard to find, this works actually pretty well."
--kraileth