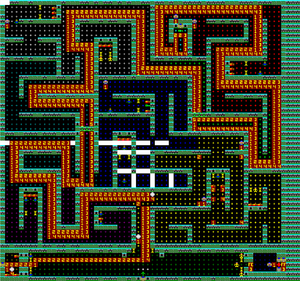 Map layout of The Wizards Maze, as visualized in the Wolf3D Data Compiler

"This map is - just like the title says - a maze. It has a garden-like theme and is actually a worthy maze. For new players it might not be too easy to solve. There are gremlins, golden trolls and Time Lords as enemies."
--kraileth