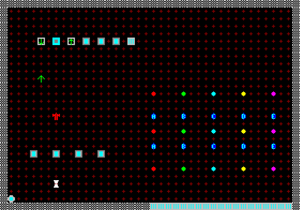 Map layout of Tile Tester 2, as visualised in the Wolf3D Data Compiler

Tile Tester 2 is a test level from the Catacomb Abyss, residing in slot 21. It has no official name, but the MAPSABS.H file in the source code refers to it as 'TILE_TESTER_2_MAP'. It appears to be mainly designed for testing the wall textures and the portals. This level is not accessible via the original DOS game executable. However, it is playable in the CatacombGL source port, via the level warp cheat. The layout of the level can also be viewed in the Wolf3D Data Compiler. 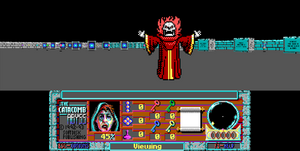 Tile Tester 2 consists of a single, large room, containing 11 columns with various wall textures. Some walls have a door texture, which upon use will take the player to The Towne Cemetery. In the southwest corner of the level is a well, as seen in the final room of The Subterranean Vault. Entering the well takes the player to The Towne Cemetery. There are five pairs of portals present, which is also the maximum amount of portals that the game supports. Next to the portals are three sets of gems in all of the five different colors. Picking up a gem of every color makes Nemesis visible on the radar, which is the only enemy present in the level.

There is no LEVEL22TEXT entry in the EGAGRAPH.ABS file, hence there are no messages defined for this level.

Retrieved from "https://catacomb.miraheze.org/w/index.php?title=Tile_Tester_2&oldid=733"
Categories:
Cookies help us deliver our services. By using our services, you agree to our use of cookies.