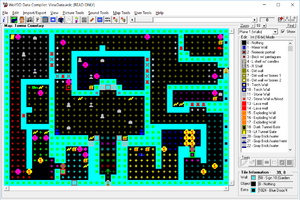 The graphical user interface of the Wolf3D Data Compiler, showing the map layout of The Towne Cemetery from the Catacomb Abyss

"This is a new program/editor being created for the community by Adam Biser. WDC stands for Wolf3D Data Compiler and is a full-featured editor for Wolfenstein 3-D and Spear of Destiny. WDC also works with Blake Stone 1 and 2, Operation BodyCount, Corridor 7, Catacomb 3D, the Catacomb trilogy, and Commander Keen 4-6. However, some of these additional games have only partial functionality. The help file contains a chart detailing available functionality for each game."
--DieHard Wolfenstein Bunker

Wolf3D Data Compiler is an editing tool for Wolfenstein 3D and similar games, including partial functionality with Catacomb 3D and the Catacomb Adventure Series.

Retrieved from "https://catacomb.miraheze.org/w/index.php?title=Wolf3D_Data_Compiler&oldid=742"
Category:
Cookies help us deliver our services. By using our services, you agree to our use of cookies.